What is Ultrasound Imaging of the Musculoskeletal System?

Ultrasound imaging is a noninvasive medical test that helps physicians diagnose and treat medical conditions. Ultrasound imaging, also called sonography, involves exposing part of the body to sound waves to produce pictures inside the body. Ultrasound exams do not use ionizing radiation (as used in x-rays) because ultrasound images are captured in real-time, they can show the structure and movement of the body’s internal organs, including blood flowing through blood vessels. Ultrasound images of the musculoskeletal system provide pictures of muscles, tendons, ligaments, joints and soft tissue throughout the body.

How does the procedure work?

Ultrasound imaging is based on the same principles involved in the sonar used by bats, ships and fishermen. When a sound wave strikes an object, it bounces back, or echoes. By measuring these echo waves it is possible to determine how far away the object is and its size, shape, and consistency (whether the object is solid, filled with fluid or both).

In medicine, ultrasound is used to detect changes in appearance of organs, tissues, and blood vessels, or to detect abnormal masses, such as tumors. In musculoskeletal exams, ultrasound is a remarkable tool to assess soft tissue structures including tendons, ligaments, muscles, and joints.

In an ultrasound examination, a transducer both sends the sound waves and records the echoing waves. When the transducer is pressed against the skin, it directs small pulses of inaudible, high-frequency sound waves into the body. As the sound waves bounce off of internal structures, the sensitive microphone in the transducer records tiny changes in the sound’s pitch and direction. These signature waves are instantly measured and displayed by a computer, which in turn creates a real-time picture on the monitor. One or more frames of the moving pictures are typically captured as still images.

What are the BENEFITS? risks?

How is Ultrasound preformed?

For most ultrasound exams of the musculoskeletal system, the patient is either seated or lying down. A clear water-based gel is applied to the area of the body being studied to help the transducer make secure contact with the body and eliminate air pockets between the transducer and the skin. The transducer is firmly pressed against the skin in various locations, sweeping over the area of interest or angling the sound beam to better see an area of concern. 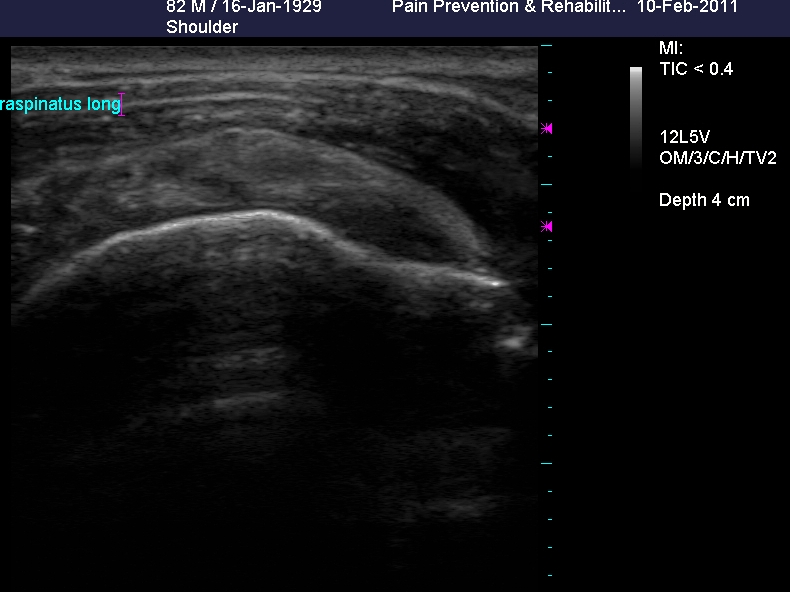