The spine condition called isthmic spondylolisthesis occurs when one vertebral body (the bony part of the spine) slips forward on another because of a small fracture in a piece of bone that connects the two joints on the back side (the pars interarticularis) of the spinal segment. Between 5 to 7% of the population has either a spondylolysis or spondylolisthesis, but in most cases it is asymptomatic. It has been estimated that 80% of people with a spondylolisthesis will never have symptoms, and if it does become symptomatic, only 15 to 20% will ever need surgical correction. The fracture is caused by stress to the bone and occurs most commonly when an individual is young (around 5 to 7 years old), although symptoms such as lower back pain and/or leg pain do not typically show up until adulthood. There is another spike in occurrence of lower back pain from spondylolisthesis in adolescent athletes.

The pars interarticularis (latin for “bridge between two joints”) connects the facet joint above to the one below. It is a very thin piece of bone with a poor blood supply, which makes it susceptible to stress fractures. When it fractures there usually it usually does not cause pain or other symptoms. Trauma is not a common reason for fracturing. The fracture is due to cumulative stress, analogous to taking a paper clip and bending it multiple times. It will eventually break apart after enough stress.

Isthmic spondylolisthesis occurs most commonly in the L5-S1 level of the spine, the lowest level of the lumbar spine. It does happen rarely above this level, at L4-L5 or L3-L4, but at these levels trauma (rather than cumulative stress) is a more common cause of the fracture. A fracture has not ever been found in a newborn so it is not considered a congenital problem. The slip that results from having the fracture is most likely to progress in juvenile or adolescent individuals. Progression of the slippage in adulthood is very rare. At L5-S1 there is not usually a lot of instability associated with the condition because there is a large ligament (the sacral ala ligament) that connects the L5 vertebral body to the sacrum, preventing the progression of slippage of L5 on the sacrum.

The spondylolisthesis can be graded according the severity of the slippage of one vertebral body over another.

Fortunately, most slips are grade one or grade two, and if symptomatic they can be treated without surgery.

Patients with a grade two or higher slippage have a fairly recognizable deformity to their low back, especially if the slip is accompanied by a very vertical angle. The patient will appear to have a short trunk and a large abdomen. They will have an accompanying large lordosis (sway to the low back), and a vertical pelvis. If the hamstrings become very tight they may also have a waddling gait.

Although very rare, a condition called spondyloptosis can occur, whereby the L5 vertebral body slips off the sacrum and into the pelvis. There also can be a fracture of the pars interarticularis without a vertebral slip. The fracture itself is known as a spondylolysis. 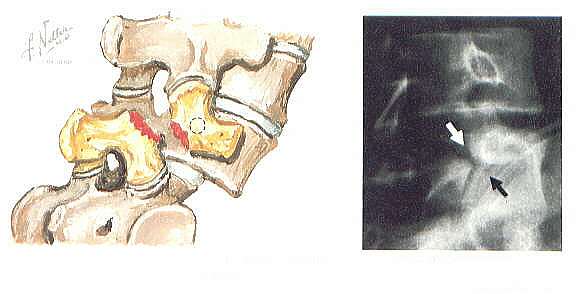 During adolescence, a small number of individuals will need surgical stabilization because of back pain that is unresponsive to non-surgical treatment. This, however, is unusual as in most cases the back pain will resolve with time. Adolescents involved in sports can develop back pain from their activity. If a spondylolisthesis is noted on x-ray, generally it is recommended that the athlete refrain from sports until he or she is free from pain. Physical therapy can be useful, especially to stretch the hamstring muscles. The condition causes the hamstrings to tighten, and as they tighten they contribute to extra stress across the disc and the fracture. Stretching of the hamstrings interrupts the cycle of pain causing hamstring spasm leading to further back pain.

For a very small minority of adolescents, if they develop a grade two or more spondylolisthesis that is symptomatic, surgical stabilization with a spinal fusion is generally recommended to prevent further progression of the slip. This is the one situation where progression is felt to be likely and the morbidity (undesirable side effects and potential complications) of a spinal fusion surgery is outweighed by the risk of progression of the deformity.

Isthmic spondylolisthesis’s may also become symptomatic in adults, most typically when people are in their thirties and forties. The most common reason for low back pain in this situation is that the disc will start to wear out. Without a posterior tether connecting the facet joints, the disc space is forced to withstand shear forces. Normally the facet joints in the back of the spine protect the disc from shear as they act to limit the shear force. When there is a pars interarticularis fracture the facet joints cannot limit shear. Discs work well as a shock absorber but they are susceptible to being damaged if they have to resist shear. The associated cumulative stress leads the disc to breakdown and eventually become painful.

Also, as the discs break down, there is less room for the exiting nerve root (the L5 nerve root) and the patient can develop leg pain (radiculopathy, or sciatica). It is common for the leg pain to be related to walking or standing as in these positions the foramen (the opening where the nerve exits the spine) is closed down. When sitting the foramen is larger and eliminates the pressure on the nerve. However, the converse may also be true, as in the sitting position the disc is loaded three times more than when standing, and the loaded disc can bulge into the foramen causing leg pain.

Non-surgical treatment for adult patients with a spondylolisthesis is similar to that for patients with back pain from other conditions and may include one or a combination of:

If pain is more severe, injections can be useful. Epidural injections can help decrease inflammation in the area near the spinal nerve(s). The pars fracture itself can be injected with lidocaine and steroids for a diagnostic study. If the patient’s pain is relieved after a lidocaine injection it can be assumed that the pars fracture is the source of the patient’s pain. The steroid can be useful to reduce inflammation in the pars interarticularis, helping to relieve the pain and allow the patient to progress with non-surgical treatment.

In most cases non-surgical treatment is successful in relieving the patient’s pain, but if not surgery can be considered. Spinal fusion surgery for spondylolisthesis is generally quite effective, but because it is a large procedure with a lot of recovery, it usually is not considered until a patient has failed to find pain relief with at least six months of vigorous non-surgical treatment. Because a lumbar fusion inherently alters normal spinal mechanics and may lead an acceleration of degenerative changes, surgery must be a “last resort” and reserved for the older individual.

A posterior fusion with pedicle screw instrumentation is generally considered the gold standard form of lumbar spinal fusion. The surgeon may also recommend a spinal fusion done from the front of the spine (an ALIF) at the same time. The type of spinal fusion that is recommended by a surgeon is based largely on a surgeon’s preference and experience, as well as the patient’s clinical situation.