The muscles and ligaments of the spine serve to stabilize and support the spine to allow it to remain upright and also allow movement in a variety of positions.  Ligaments are fibrous and tough tissues that form a criss-cross pattern in order to keep the spinal column together. Spinal ligaments actually hold the vertebrae together and stabilize the spine.

There are three major ligaments found in the spine.  The anterior longitudinal ligament attaches to the front of each vertebra. The posterior longitudinal ligament runs vertically from the (base of the skull) brain to the tailbone behind and beside the spinal canal. The third type of ligament is known as the ligamentum flavum; this ligament connects under the facet joints and forms a hood over the dura mater, thus protecting the spinal cord.

Spinal muscles are also attached to the spine and, like ligaments, serve to stabilize the spine. The body’s complex muscular system allows for motion by manipulating thousands of intricate movements. Muscles are the only human tissues capable of contracting and relaxing. When a muscle contracts, the tissue becomes shorter and thicker. This series of muscle contraction and relaxation dictates how the body moves.  However, when a muscle is put under enough stress, it can spasm and tense up into knots; muscle strain is a common reason for back pain. 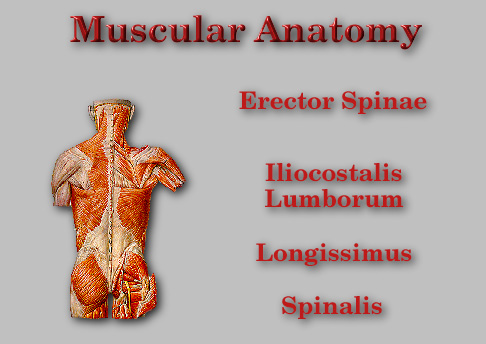 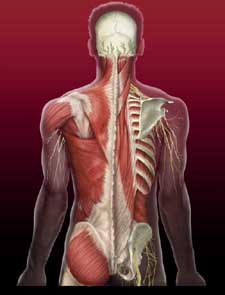