Intersection Syndrome is a painful condition of the forearm and wrist. It can affect people who do repeated wrist actions, such as weight lifters, downhill skiers, and canoeists. Heavy raking or shoveling can also cause intersection syndrome.

Most of the tendons around the wrist are covered with a thin tissue called tenosynovium. Tenosynovium is very slippery. It allows tendons to glide against one another and the surrounding muscles, fat, and skin with very little friction. If you overuse the wrist extensor tendons, the slippery tenosynovial lining may become inflamed from the constant rubbing against the two thumb muscles. As the tenosynovium becomes more irritated and inflamed, it swells and thickens. You feel pain when you move your wrist because the swollen tendons are rubbing against the thumb muscles.

The wrist extensor tendons are strained by any activities that cause the wrist to curl down and in, toward the thumb. These wrist movements are especially common in downhill skiers when they plant their ski poles deeply in powder snow. The same movement is involved when pulling a rake against hard ground. Racket sports, weight lifting, canoeing, and rowing can also stress the wrist extensor tendons.

The friction on the wrist tendons causes pain and swelling in the tenosynovium that covers the tendons. The friction hampers the smooth gliding action. You may experience a creaking as the tendons rub against the muscles. This is called crepitus. You may have swelling and redness at the intersection point. Pain can spread down to the thumb or up along the edge of the forearm.

Intersection Syndrome involve inflammation in the tendons of the wrist. However, the pain begins in different spots. Intersection syndrome causes pain at the intersection point, about three inches up the forearm. De Quervain’s tenosynovitis causes pain along the edge of the wrist, closer to the hand. Your doctor will examine your forearm and wrist carefully to locate exactly where your pain is coming from.

It is most important to stop or change activities that are causing your symptoms. Take frequent breaks when doing repeated hand and thumb movements. Avoid repetitive hand motions such as heavy grasping, wringing, or turning and twisting movements of the wrist. Downhill skiers may get relief by avoiding heavy planting and dragging of their ski poles and by getting a shorter pole with a smaller basket diameter.

Keep your wrist in a neutral alignment. In other words, keep it in a straight line with your arm, without bending it down and in. You may be issued a special forearm and thumb splint called a thumb-spica splint. It keeps the wrist and lower joints of the thumb from moving. By resting the wrist extensor tendons and the thumb muscles, it allows the area to begin healing.

Anti-inflammatory medications may help control the swelling of the tenosynovium and ease symptoms. These medications include common over-the-counter medications such as ibuprofen and aspirin. Ice treatments can also help decrease swelling and relieve pain.
If these simple measures fail to control your symptoms, your doctor may suggest an injection of cortisone. Cortisone is a very effective anti-inflammatory medication. Cortisone injections will usually control the inflammation in the early stages of the problem. However, cortisone’s effects are generally temporary, lasting from several weeks to months.

Your doctor may have you work with a physical or occupational therapist. The main focus of treatment is to reduce or eliminate the cause of the irritation to the thumb tendons. Your therapist may check your workstation and the way you do your work tasks. Your therapist may give you suggestions about healthy body alignment and wrist positions, helpful exercises, and tips on how to prevent future problems.

Surgery is rarely necessary to treat intersection syndrome. In extremely difficult cases, a surgeon may remove some of the thickened tenosynovium around the tendons. The operation is called a tendon release. 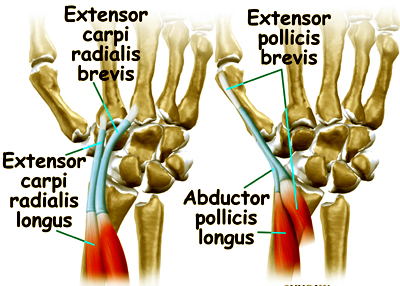