MP can cause local or referred pain, tightness, tenderness, popping and clicking, stiffness and limitation of movement, autonomic phenomena, local twitch response (LTR) in the affected muscle, and muscle weakness without atrophy. Trigger points (TrPs), which cause referred pain in characteristic areas for specific muscles, restricted range of motion (ROM), and a visible or palpable LTR to local stimulation, are classic signs of MP. Over 70% of TrPs correspond to acupuncture points used to treat pain.

An active TrP is an area that refers pain to a remote area in a defined pattern when local stimulation is applied. Satellite TrPs appear in response to a primary active TrP and usually disappear after the primary active TrP has been inactivated. Latent TrPs cause stiffness and limitation of ROM but no pain. Frequently, they are found in asymptomatic individuals.

WHAT IS A TRIGGER POINT?

Pathophysiology: A taut band in a muscle may be necessary as a precursor to development of a TrP. Taut bands are common in asymptomatic individuals, but patients with them are more likely to develop a TrP. A latent TrP can develop into an active TrP for a number of reasons. Psychological stress, muscle tension, and physical factors, such as poor posture, can cause a latent TrP to become active.

The pathophysiology of MP is not understood well. Current research supports sensitization of low-threshold mechanosensitive afferents associated with dysfunctional motor endplates in the area of the TrPs projecting to sensitized dorsal horn neurons in the spinal cord. Pain referred from TrPs and LTR may be mediated through the spinal cord after stimulation of a sensitive locus.

Mortality/Morbidity: MP is not a fatal condition, but it can cause significant reduction in quality of life (QOL) and is a major cause of time lost from work. Costs associated with MP sap millions, perhaps billions, of dollars from the economy.

Race: No racial differences in incidence of MP have been described in the literature.

Sex: MP is distributed equally between men and women.

Age: Myofascial TrPs can be found in persons of all ages, even infants. The likelihood of developing active TrPs increases with age and activity level into the middle years. Sedentary individuals are more prone to develop active TrPs than individuals who exercise vigorously on a daily basis. 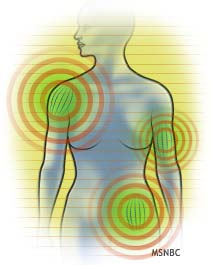